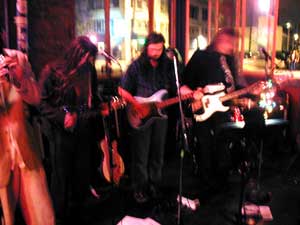 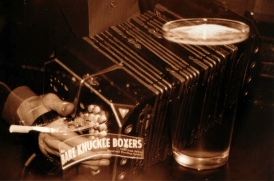 In January of 1998 Blake Carter found a curious old instrument in his parents' garage. It turned out to be a cheap old tourist model concertina that they had brought back from europe. Not knowing quite what to do with this unfamiliar box of reeds and buttons an idea formed in his Guinness-laden brain late one weekend night. With his love of Irish drinking music he knew that he was destined to play Danny Boy on the concertina.

To get started he went out and bought a how-to-play-concertina book and convinced a coworker, Odin Bettinger to come over with his guitar. The music was unfamiliar and the chords were even worse (in more ways than one). The pair decided that playing Irish music was good and had another beer while flailing about with their instruments. The informal beer stained jam sessions continued through winter in their apartments. Soon it became spring and the two were barely starting to get the hang of it. There were other beginners cliché Irish songs to be played as well, such as Cockles and Mussels, and When Irish Eyes Are Smiling . Favorite CDs to listen to were The Pogues or Shane McGowan, The Dubliners, Christy Moore, Clancy Brothers, Tommy Makem, and various cheesy $3.99 "Songs of Ireland" type albums.

As the springtime started to warm up, they decided to take the jam outside and have some fun. Every sunny weekend they would meet in the Arboretum, a huge park in Seattle, to jam with whatever friends were willing to show up. Ah, the memories! There were penny whistles, banjos, mandolins, guitars, bodhran, and concertina. Many people came by and played including Nathan, Wi, Blake's brother Scott and others. Among these early comers were Greg Brotherton, Mike Whybark, and Odin's ex-wife Chelle. Some players were beginners and some were not. The playing in whole was getting better and Odin began to sing for the first time in his life at this point.

The first semblance of an organised band grew out of that original chaos. Odin ran into an old co-worker Sean Kearney. It happened to be that he was a drummer. Not only that, but he actually owned a drum set! When the weather was bad they would play in Sean's living room and could make quite a lot of noise! Karel joined the group around this time. Amps and pickups started showing up one by one. There was a PA system and vocal mics were hooked up. Pretty soon they practiced there exclusively, good weather or not. Shortly after, Mike brought in Lance Biggs to play bass. He had worked on music with Lance in the past.

Realizing that they were now a band, the game of "Name The Damn Band" commenced for a couple months. Sean Kearney thought up the name they decided on: The Bare Knuckle Boxers. They had outgrown the living room at Sean's and rented a rehearsal space at a central location on Capitol Hill. The first BKB show was at the end of that summer in Sean's backyard in the new house he'd moved to in West Seattle. Only a few songs were played when the neighbors showed up, threatening everyone with raised fists. The party was just warming up and they were shutdown by a noise complaint which caused the cops to cruise by...

The next show was a tremendous success relative to the first try. It was at the Rendesvous and was rented for the night by the band. One highlight of the show was the misuse of a smoke machine at the start of the night when the entire club was filled with dense smoke. There were many friends and fun was had by all. This was the start of the band's stage experience.

A few months later, the band had started the website and shows were starting to be booked anywhere they could play. Sean and Lance ended up leaving and forming their own band for awhile. Chelle started playing the bodhran with the band. Will Hallauer stepped in to fill in on drums temporarily for a couple months. Chelle picked up some drumsticks one day and has not put them down since. With Will to guide her, Chelle took over as the main drummer within 2 months. Will was in the Antagonists,a punk and surf band that shared the room with BKB at the time. Will is currently in two bands: the Turn-Ons and Holy Gasoline. Karl Kill was brought in to play on bass which brings us to the current lineup of members.